How to Train a Cat to Use a Litter Tray Not all litter boxes are created equally. They do the same job, but whether they appeal to your cat and suit your household are other factors to consider.

Many of us start with basic litter trays; however, there is a huge variety to choose from. Closed litter boxes offer greater privacy for your cat, and contain the smell more effectively. They are also harder for little hands to dig into, thinking the litter tray is a sandpit.

I recently switched to using a closed litter box with my cats, which wasn’t easy but was worth it.

Beyond the aesthetics of the box – and there are some fancy ones which look like upmarket furniture pieces – think practically.

With a baby in the house, I chose a hooded litter tray with access from the top rather than the front. These aren’t a great option for older cats or kittens as they require them to jump in and out of the box.

A hooded box with a pull-out tray works well for busy households or small spaces, as it tends to hide the smell better. Closed litter boxes are bulkier than open trays, so also bear in mind where you will put them, as you’ll want it to be a private, quiet spot.

Make it a Slow Transition

Cats are sensitive to change, so getting them used to their new litter box might take some time.

That was the case for my cats, who circled around the new arrival like it was from outer space. Since they were used to stepping in and out of an open litter tray, it wasn’t surprising that they didn’t exactly know what to do .

The last thing you want is your cat being so freaked out by the change that they refuse to use the box. As we have a couple of trays, I kept one open tray for the cats to use while they became familiar with the box.

Although it may seem odd, placing food in the (new and empty) box made my cats more comfortable with it. We have an enclosed litter box with an opening at the top for the cats to climb into.

I placed a few dry treats in the box as well as some on the hood, which got them to jump in and out. This helped familiarise them with the litter box and understand how to access it. Obviously, they soon cottoned on that this wouldn’t continue to be their food bowl, which is why it’s good to only do this for a day or so.

Use the Same Litter

Not technically the same litter (although scooping a bit of dirty litter into the new tray may help familiarise them with it), but the type of litter.

If you’re keen to try another litter type, wait until your cat is used to the new box – you don’t want to make to many changes at the same time because if they start avoiding the box, it’ll be hard to pinpoint why.

It’s well-known that you can’t make a cat do anything they don’t want to. No matter how much training and bribery you use, it doesn't always work.

If your cat seems spooked by the box and actively avoids it, you might need to accept that they are not a fan.

While my boy cat took to the box within a week, my girl cat still prefers the open tray. It’s good to give them options so they can choose which they prefer, even if it’s not the one you’re hoping for. 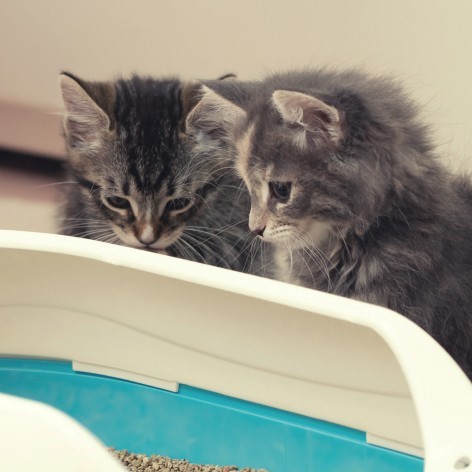 How Many Cat Litter Trays for my House

Litter trays are essential if you have an indoor cat but how many litter trays do you need for your house and where should you have them? Microchipping your Kitten or Cat

Microchips are so much more useful than just helping to reunite lost kittens and cats with their owners. Find out the facts on microchipping your kitten or cat. Cats generally take care of their own grooming, to keep their skin healthy and coat smooth and clean. But some cats, especially older one, will need your help.